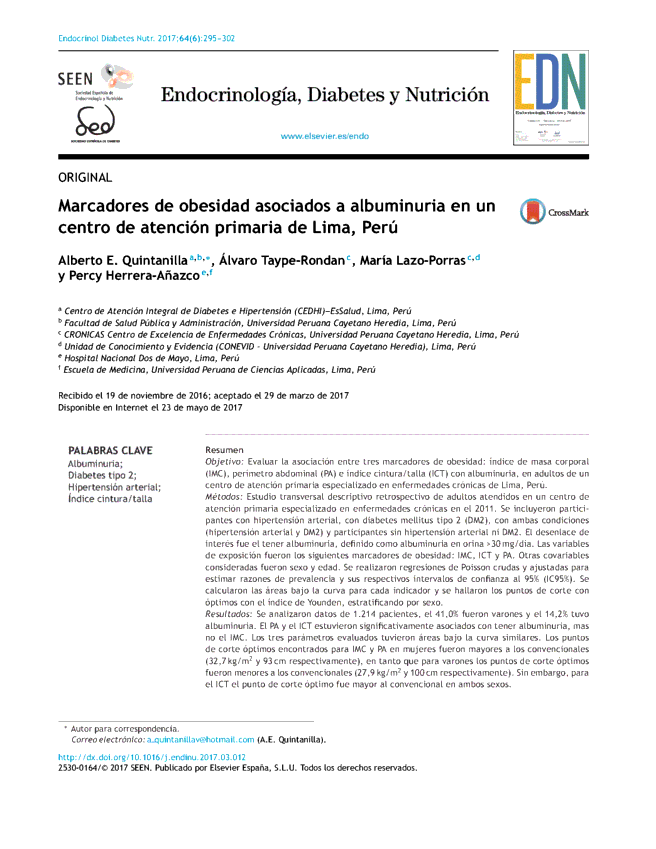 Objective To evaluate the association between three obesity markers, body mass index (BMI), abdominal circumference (AC), waist to height ratio (WHtR), and albuminuria in adults seen in a primary health care center specialized in chronic diseases in Lima, Perú. Methods A cross-sectional, descriptive, retrospective study in adults who attended a primary health care center specialized in chronic diseases in 2011. Patients were divided into four categories: healthy subjects and patients with high blood pressure, with type 2 diabetes mellitus (T2DM), and with both diseases (HBP + T2DM). The main outcome was presence of albuminuria, defined as urine albumin levels higher than 30 mg/day. Exposure variables included the following obesity markers: body mass index (BMI), waist-to-height ratio (WHtR), and abdominal circumference (AC). Other covariates considered included sex and age. Crude and adjusted Poisson regressions were performed to estimate prevalence ratios (PRs) and their respective 95% confidence intervals (95% CIs). Areas under the curve were calculated for each indicator, stratified by sex. Results Data from 1,214 patients, 41% of them male, were analyzed, and albuminuria was found in 14.2%. Albuminuria was found to be associated to AC and WHtR, but not to BMI. All three parameters assessed had similar areas under the curve. The optimum cut-off points found for BMI and AC in females were higher than conventional (32.7 kg/m2 and 93 cm respectively), while the values in males were lower than conventional (27.9 kg/m2 and 100 cm respectively). For WHtR, however, the optimum cut-off point was higher in both sexes. The higher index in females was for BMI, followed by AC and WHtR. In males, the higher index was for WHtR, followed by AC and BMI. Conclusions AC and WHtR were found to be directly associated to albuminuria, while BMI was not associated to albuminuria. Areas under the curve were similar for all three markers. The optimum cut-off points for BMI and AC were higher than the conventional ones in females and lower in males.