Cannabinoids for Medical Use A Systematic Review and Meta-analysis 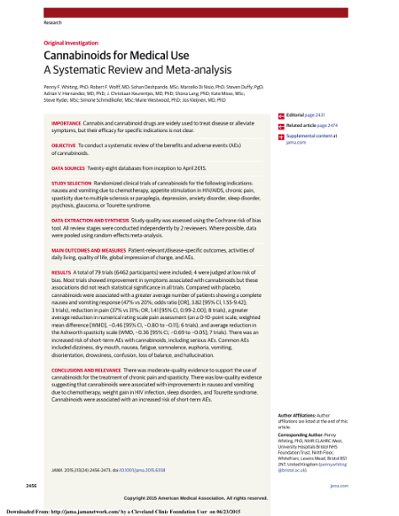 Importance Cannabis and cannabinoid drugs are widely used to treat disease or alleviate symptoms, but their efficacy for specific indications is not clear. Objective To conduct a systematic review of the benefits and adverse events (AEs) of cannabinoids. Data Sources Twenty-eight databases from inception to April 2015. Study Selection Randomized clinical trials of cannabinoids for the following indications: nausea and vomiting due to chemotherapy, appetite stimulation in HIV/AIDS, chronic pain, spasticity due to multiple sclerosis or paraplegia, depression, anxiety disorder, sleep disorder, psychosis, glaucoma, or Tourette syndrome. Data Extraction and Synthesis Study quality was assessed using the Cochrane risk of bias tool. All review stages were conducted independently by 2 reviewers. Where possible, data were pooled using random-effects meta-analysis. Main Outcomes and Measures Patient-relevant/disease-specific outcomes, activities of daily living, quality of life, global impression of change, and AEs. Results A total of 79 trials (6462 participants) were included; 4 were judged at low risk of bias. Most trials showed improvement in symptoms associated with cannabinoids but these associations did not reach statistical significance in all trials. Compared with placebo, cannabinoids were associated with a greater average number of patients showing a complete nausea and vomiting response (47% vs 20%; odds ratio [OR], 3.82 [95% CI, 1.55-9.42]; 3 trials), reduction in pain (37% vs 31%; OR, 1.41 [95% CI, 0.99-2.00]; 8 trials), a greater average reduction in numerical rating scale pain assessment (on a 0-10-point scale; weighted mean difference [WMD], −0.46 [95% CI, −0.80 to −0.11]; 6 trials), and average reduction in the Ashworth spasticity scale (WMD, −0.36 [95% CI, −0.69 to −0.05]; 7 trials). There was an increased risk of short-term AEs with cannabinoids, including serious AEs. Common AEs included dizziness, dry mouth, nausea, fatigue, somnolence, euphoria, vomiting, disorientation, drowsiness, confusion, loss of balance, and hallucination. Conclusions and Relevance There was moderate-quality evidence to support the use of cannabinoids for the treatment of chronic pain and spasticity. There was low-quality evidence suggesting that cannabinoids were associated with improvements in nausea and vomiting due to chemotherapy, weight gain in HIV infection, sleep disorders, and Tourette syndrome. Cannabinoids were associated with an increased risk of short-term AEs.