The delay of consequences and perceived risk: an analysis from the workers' view point 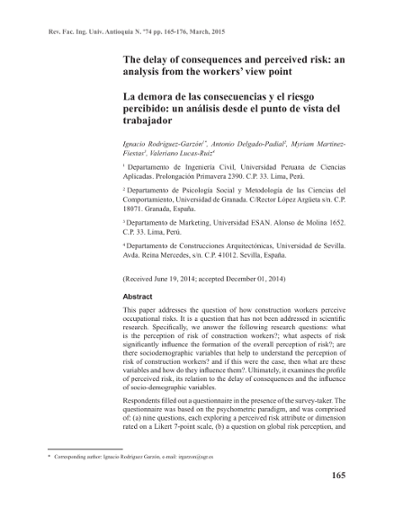 This paper addresses the question of how construction workers perceive occupational risks. It is a question that has not been addressed in scientific research. Specifically, we answer the following research questions: what is the perception of risk of construction workers?; what aspects of risk significantly influence the formation of the overall perception of risk?; are there sociodemographic variables that help to understand the perception of risk of construction workers? and if this were the case, then what are these variables and how do they influence them?. Ultimately, it examines the profile of perceived risk, its relation to the delay of consequences and the influence of socio-demographic variables. Respondents filled out a questionnaire in the presence of the survey-taker. The questionnaire was based on the psychometric paradigm, and was comprised of: (a) nine questions, each exploring a perceived risk attribute or dimension rated on a Likert 7-point scale, (b) a question on global risk perception, and (c) categorical questions about socio-demographic issues. The survey was conducted in the city of Granada (Spain). A profile of the construction workers’ perceived risk was obtained. Answers to each attribute were above the neutral line (scores above four). The profile shows the risk dimension with the highest score was the delayed consequences of exposure to risk conditions, a dimension that can be related to ergonomics and occupational hygiene. This is a new outcome since traditionally this dimension was given a lower score in the worker’s perception. A simple linear regression showed global risk may be explained in terms of the delayed consequences dimension (R2=0.29). Finally, a variance analysis (ANOVA) and several t-tests explored the relationship between this dimension and the sample’s socio-demographic variables. To conclude, the delay of consequences is the risk dimension workers perceived as the most critical in their daily chores. In addition, this risk dimension is decisive in creating a high global risk perception. Parenthood, a higher worker category and training are the only socio-demographic variables having an impact on this dimension of perceived risk. Hence, there is a direct relationship between these two variables.

The following license files are associated with this item: